Who Are The Dispatchers Behind 911? 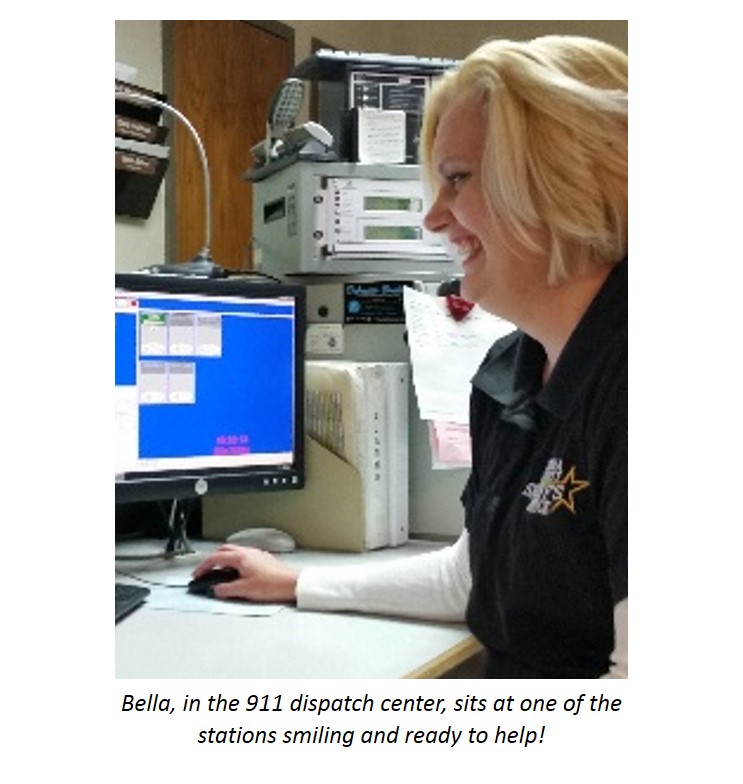 It takes a rare person and unique skills to be able to do the job required of a 911 dispatcher. They have the ability to stay calm under pressure and help you during what may be the worst-ever event in your life. They gather essential information related to your emergency and send the right kind of help to the right location. Potentially, they may provide medical or other instructions to you until help arrives.

911 dispatchers are trained to State levels of emergency police, fire and medical dispatch. They are professionals that have strong multi-tasking skills, who many times are listening to a caller on the phone, communicating by radio to emergency responders going to an incident, and recording incident details via software systems all at the same time.

Round-the-clock 911 service has been available for 24 years in Pembina County. Fire, ambulance and law enforcement can be contacted by dialing just one, easy to remember, 3-digit number. Bella, a dispatcher in the Sheriff’s Office said, “We have the opportunity and the resources to get them the help that they need. When sometimes all a caller ‘can do’ is dial 3 numbers on the phone, we have the ability to sometimes save a life, or stop someone from taking theirs.”

Calling 911 is the quickest means of dispatching emergency response teams. Sheriff Terry Meidinger said, “Dispatchers are often called first responders because they are on the front line, the first link in the chain who deal with life and death situations, every day, 24 hours a day, 7 days a week, 365 days a year.” “They are dedicated, dependable and loyal people.”

One of the ways the dispatch process is streamlined, is through the use of a mapping system that automatically plots the point of the 911 caller, based on their landline number or location information derived from a GPS chip in their cell phone. ‘Emergency service zones’ have been mathematically determined, so that if a 911 call originates inside a particular zone boundary, the corresponding response team to an incident is dispatched.

This response team has the quickest ability to arrive at the scene, based on their starting point, road types, speed, and number of turns. This lessens the time for dispatchers to make a decision.

The information gathered by dispatchers from 911 callers is primarily shared with responders via means of the paging system and radio. The radio system is the responders’ lifeline. Dispatchers serve our community by providing our emergency medical, fire and law enforcement with vital information. “It’s the goal of every dispatcher to communicate quickly to coordinate response and protect lives,” said Meidinger.

911 phone, radio systems, supporting equipment and software are essential to emergency responders and expensive to maintain. Currently, the land line and wireless phone companies collect a $1.00 fee per phone from each customer. The money is directed to the County 911 fund, and set aside strictly for maintenance and improvements to the 911 system since it was first established in 1992. Meidinger said, “It has served well the needs of the public in emergencies.”

Technology advancements and Next Generation 911

While efforts are underway across the nation to enable dispatch centers to accept text messages, the future success of 911 in serving the public's needs will be greatly improved when 911 has transitioned to an Internet Protocol (IP)-based 911 system, commonly referred to as Next Generation 911, or NG911.

NG911 is a nationwide, IP emergency communications infrastructure, and counties in North Dakota aim to purchase enabled equipment within the next few years. It will enhance emergency services that allows digital information (e.g., voice, photos, videos, text messages) to flow from the public, through the 911 network and directed to first responders. 911 centers will have enhanced tools at their disposal for more effective and efficient response, and increased ability to interoperate with other 911 centers or transfer all functionality in the event of a major disaster.

Dispatchers readily adapt to continually changing technologies and are challenged every day in many ways. The second week of each April is dedicated to the men and women who serve as public safety dispatchers. Meidinger said, “We recognize and celebrate our dispatchers for performing mission critical tasks behind the scenes to support 911 callers and our emergency responders." It is a true partnership that keeps us safe and secure, coming to our rescue in the time of need.

If you would like to learn more information, Liz may be reached at 701-265-8222, email lbeck@nd.gov, or website www.pembinacountynd.gov/911.